Researchers connect microbes in the twilight zone of the ocean with the breakdown of tough organic molecules. 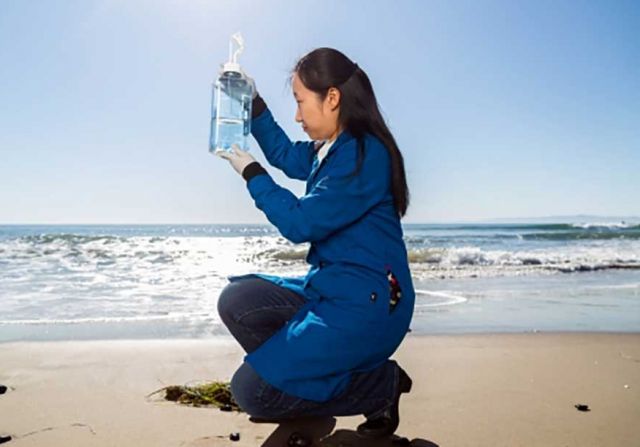 Seawater is more than just saltwater. The ocean is a veritable soup of chemicals.

Part of that broth comes from dissolved carbon compounds, which account for a significant store of global carbon, on par with the amount held in the atmosphere. Researchers are actively working to classify what forms carbon takes in the world’s oceans, as well as the biological processes that recycle it in the ocean’s water.

Some molecules, like proteins and sugars, readily break down, while others are more resistant to degradation. A new study, led by UC Santa Barbara postdoctoral researcher Shuting Liu, investigated some of these more recalcitrant compounds and the microbes that can digest them. The results, which appear in the journal Limnology and Oceanography, illuminate basic aspects of the ocean carbon cycle and may help scientists predict the role microbes play in its regulation.

Liu and Professor Craig Carlson, in the Department of Ecology, Evolution and Marine Biology, are part of a group conducting research at the Bermuda Atlantic Time-series Study site. The site is a long-term research project in the Sargasso Sea, itself a region of the Atlantic in the vicinity of Bermuda. Over the course of many years, the scientists noticed dissolved organic matter building up in surface water during the calmer summer months. Rougher conditions in the winter mixed these compounds into deeper water, a layer scientists call the mesopelagic zone — or, the twilight zone, because spans the lowest depths that light can reach. Once that happened, some of the organic matter would break down, and the cycle would begin again. The team was eager to understand why.